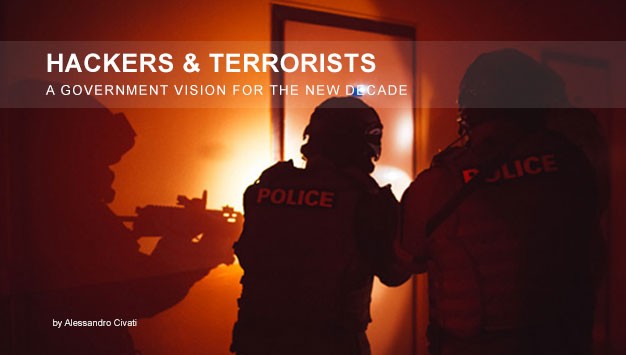 Cyber threats, network security, and sensitive information are posing complex challenges for governments, especially in national security and public policy. Cyber-based threats are proving to be the most significant national security threat for many countries across the world. Unfortunately, the widespread adoption of technology has proven to be a double-edged sword – technology has been exploited by organized criminal groups and syndicates, terrorists, and even state-sponsored hackers to hijack critical infrastructure supporting commerce, national economies, military installations, and public safety.

A Government Vision for The New Decade – Hackers & Terrorists are focused on stealing state secrets, trade secrets, latest technologies and essential data, personal data, and any other critical items of value. Terrorists and state-sponsored actors target critical infrastructure and installations, different sectors of the economy, propaganda promotion tools, and target free speech. It is no longer feasible to physically invade nation-states, and adversaries have resulted in launching destructive cyber-attacks. A well-coordinated cyber-attacks could be more devastating in terms of human life and to the economy than the aftermath of 9/11 in the United States. The consequences of power outages, flight cancellations, and communication disruptions caused by natural phenomena can be used to evaluate the effects of cyber-attacks and cyber-terrorism.

The biggest threat to governments in high-level network intrusions perpetrated by state-sponsored actors and organized global crime syndicates focused on disrupting national security, the economy, and public safety. Critical infrastructure is highly dependent on computer networks, and in some cases, redundancy hasn’t been built into these systems. That means a network intrusion can cause devastating disruption to human life and an entire economy. In recent years, the frequency and severity of cyber-attacks on government infrastructure and the private sector has increased significantly. Corporates have contended with network intrusions and data breaches and the demands for ransom to get back control of data and critical networks. Studies reveal that malicious botnets used by cybercriminals have cost businesses billions of dollars in damages over the last several years. In addition, the shift to remote work necessitated by the COVID-19 pandemic has seen intrusions and data breaches increase dramatically across the board in the last year.

Cyber-attacks are becoming increasingly sophisticated, with criminals and adversaries seeking to bring down critical infrastructure with computer-based controls such as banking, energy installations such as dams and power grids, and transportation systems. In addition, factors such as the ease of laying hands-on malware have allowed hackers & terrorists(A Government Vision for The New Decade) to leverage millions of compromised servers, computers, and other network-connected devices to disrupt the activities of businesses and governments.

Governments are faced with the challenge of stopping cyber threats and attacks. Most of the computer infrastructure is found in the private sector, including energy production, banking, communication, and all other sectors of the economy. However, coordinated efforts against cyber threats are still a distant goal as private sector companies shy away from disclosing attacks and sharing information for fear of lawsuits and upsetting shareholders.

Despite the many cybersecurity products that promise quick fixes, the sophistication and persistence of attacks demand the development and deployment of equally sophisticated solutions. This has compelled states to institute measures to curb cyber threats through technical capabilities, electronic surveillance, forensics, and even physical surveillance. A report from the U.S. Cyber Command indicates that a day is coming when attacks on network infrastructure will morph into destruction from common theft and disruption.

Besides cyber threats increasing in scope and size, they are becoming more challenging to investigate technical and resource capabilities. Cybercriminals are devising ingenious and sophisticated ways to facilitate their nefarious activities. The challenges include barriers to entry are getting lowered as cybercriminals aggregate and share tools on online forums, obfuscation of identities, and leasing of leased and compromised infrastructure to obscure malicious activity.

Governments are now focused on coordination with partners across the globe in the face of the increasing sophistication of attacks, and they are exploring several efforts to curb the onslaught of cyber threats. The big focus is on improving threat identification and developing information-sharing mechanisms both within the government and private sectors. States are also exploring and fostering partnerships in the fight against cyber-crime and cyber-terrorism. Additionally, there are efforts to coordinate with public and private partners to address different challenges about cyber-crime and cyber-terrorism.

Additionally, governments are investing in developing and retaining talent to addresses the challenges associated with cyber threats. A shortage of network security experts is a significant problem in combating cyber threats both within the government and the private sector. We are not developing skilled professionals fast enough to fill existing gaps and match the technical skills of sophisticated attacks. As a result, programs in schools have been set up to generate interest in the cybersecurity sector and nurture identified talent. Furthermore, the government is partnering with academic institutions to study cybersecurity trends and develop solutions to stop these threats.

Finally, cybersecurity should be embedded in technology solutions deployed both in the public and private sectors. Government and industry should work on legislation and policies that govern the deployment of technology solutions so that cybersecurity is at the core right from the beginning. Embedding cybersecurity into solutions will help to reduce costs and improve resilience in the face of cyber-attacks. Again, it’s about considering cyber in everything government, and the private sector does. In conclusion, governments must respond adequately through policy and information sharing to increase interdependence among economies and global value chains. The goal should be to emphasize cooperation between nations to fight cyber threats.